About the ‘Vote Housing’ campaign to end homelessness

About the ‘Vote Housing’ campaign to end homelessness

As Canada reopens and vaccination rates increase, a federal election is anticipated for the fall. In anticipation of the election, the Vote Housing campaign launched on June 17, 2021 as a national, non-partisan, grassroots advocacy campaign led by the Canadian Lived Experience Leadership Network (CLELN), the Canadian Alliance to End Homelessness, the Canadian Housing & Renewal Association, and the Co-operative Housing Federation of Canada.

Updates from the Vote Housing Campaign

Every day in Canada, 1.7 million households live in a home that is either unaffordable, overcrowded and/or needs major repairs, while 35,000 Canadians experience homelessness on any given night.  Further, 36% of Canadians have been homeless themselves or know someone who has been homeless. Read the 2021 Federal Election Platform

[Added Aug. 20, 2021] It’s day 4 of the 36-day federal election and thousands of Vote Housing supporters are already working hard to spread the word about the campaign. Check out two quick things that you can do right now that will make a difference.

Get Visible Where You Live

Download a print-at-home window sign right now and display it in your window at your home or workplace. You can also get a weatherproof lawn/window sign and other supplies in our Supporter Kits that are available on our website. Any net proceeds from Supporter Kits go back into the campaign.

The Vote Housing Campaign is intended to harness the power of Canadians across the country to engage and mobilize to pledge to vote housing in the upcoming federal election, and ensure all political parties support making bold investments in affordable housing and ending homelessness. The campaign is supported and endorsed by coalition partners (including Calgary Housing Company!) but fueled by everyday Canadians.

The time to finally end homelessness and make housing safe and affordable is now. By completing a vote pledge, you will be added to the list of people who care about these issues, and want to engage in that they want their voice heard on Election Day.

How can you help?

Pledge to vote housing in the federal election

Volunteer for the Vote Housing Campaign

Vote Housing is looking for local organizers and volunteers to help with door knocking, phone calling and organizing, to help carry the message about the importance of ending homelessness and housing need, and encourage people to sign-up for the Vote Housing pledge. Sign up to Volunteer!

Refer to the links below for information about the Vote Housing Platform, to Pledge to Vote and how to get involved!

Vote Housing’s Platform
Vote Housing has developed 6 actionable policies that political parties should include in their platforms if they’re committed to ending homelessness and housing need in Canada.

Sign up to Volunteer!
Vote Housing is looking for local organizers and volunteers to help with door knocking, phone calling and organizing, to help carry the message about the importance of ending homelessness and housing need. 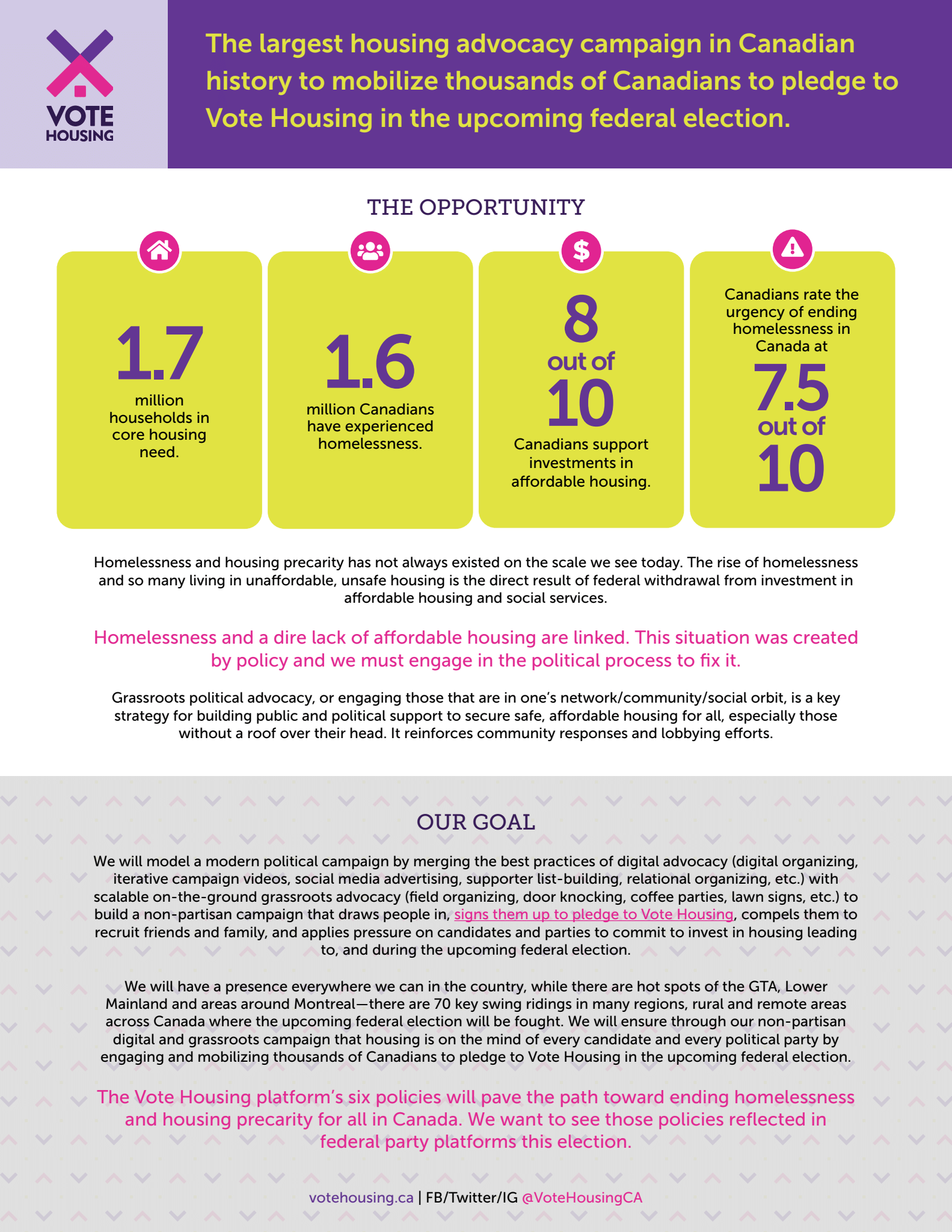